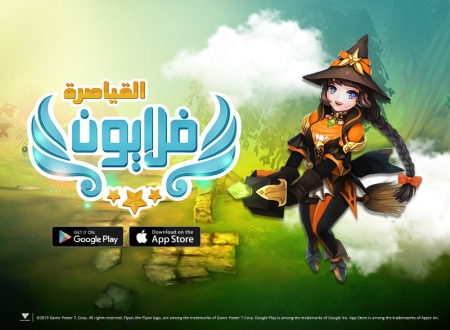 Game Power 7, the specialized company in developing and publishing online video games, has recently released a new patch of its third mobile game Flyon. The new updated patch holds the name of “The Caesars”.

Flyon is an MMORPG that brings its players a new experience in a vast fictional world. Flyon presents three character classes, each one differs in its features and overall appearances, and players shall choose one character to start their journey in a legendary land.

The main mission in Flyon is to defeat monsters and opponents despite the difficulty level which increases in parallel with advancing in the game levels. However, the flying feature in the game is the most important and distinguishing one. Players can fly over the clouds using a magical broom to reach distant areas quickly, exactly like our childhood fictional movies such as Harry Potter and Mary Poppins.

Since its release in March 2018, the game has witnessed a remarkable demand because it presented a lot of unique systems and features such as establishing battalions, making allies, transporting by pets and many more features that would continuously break dull routines.

The Caesars patch of Flyon brought new refreshing features that will take players to a new level of fun and amusement. The patch expanded the levels number from 700 to 900 and added two sub-classes to the Acrobats, Magicians and Mercenaries. Moreover, the patch included new costumes, brooms and pets in addition to ultimate gears and honor trophies. The Battle Arena and new floors of the Endless Tower are also available in this patch.

It is worth mentioning that the new patch was released in conjunction with the 2019 Event of Game Power 7, where all the games of the company held several special contests and activities with a huge number of gifts and prizes presented to the players. The 2019 Event witnessed a huge success as the players experienced amusing events in their favorite games.