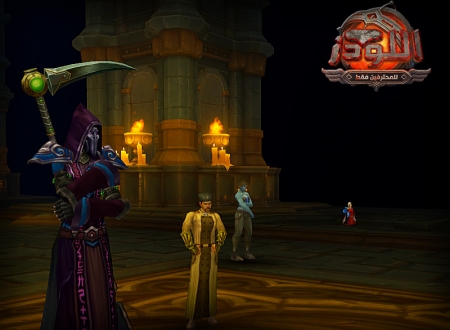 Before I start the review, let me clarify two things. First, this is a free-to-play game, and second, it is an Arabic game. Sure it may not be Arab made, but it is localized by an Arab publisher to suit the Arab region.

Allods is an MMORPG made by Russian studio Astrum Nival and it is the largest game development endeavor in Russia’s history, with a budget of 12 million dollars. The game was then localized by local publisher Game Power 7.

You start the game by joining either the Empire or the Alliance (or to put it simply, the bad guys or the good guys, respectively), then you move on to designing your own character. Despite the great variety in races and classes offered, the game provides limited design choices. Soon you will be ready to dive in the game’s story; centered around the destruction of planet Sarnaut, which resulted in a myriad of floating islands in the game’s Astral world.

The story takes you the city of Aradas, where the game’s quests await you. There you will find numerous quests and missions, ranging from main missions to party missions to repetitive side quests for the lazy bums who usually occupy fantasy RPGs.

The quests in Allods are many, and the game world is huge despite this being a free game. This also means that the quests can get repetitive after a while, and after a while, you’ll find that most missions ask you to kill X amount of monsters or collect Y amount of elements or kill X amount of monsters standing between you and Y amount of elements. But the desire to leveling up your character (and the subsequent satisfaction) drive you forward.

Most of the enjoyment comes from party-based missions, and questing with your teammates to slay powerful monsters gives you a sense of satisfaction unrivaled by anything else in the game. The game puts a lot of emphasis on teamwork and coordination, as the challenges you face in party-based missions are the toughest in the game’s repertoire, and the enemies you face with your party are some of the most powerful the game has to offer. Unfortunately, though, the enemies in the single player missions were hardly a challenge.

You’ll find a lot of enjoyment in leveling up your character, and the leveling system here is very well done. Every mission has a “minimum level” requirement you should meet before heading on, which gives you a great incentive to level up your character (and gloat in front of all the other players). However, I didn’t see much difference in the skills and enhancements I gained by leveling up, and in the end, I chose skills without giving it much thought.

Allods is a huge game, and you will spend a lot of time exploring the game’s various cities and regions. Thankfully, the environments are truly engaging, with truly beautiful and surreal and (most importantly) varied designs. You will come across mountains and valleys, towering cities and barren snow lands, all with their own enchanting designs. Unfortunately, we cannot say the same for character designs

The voice acting in the game is somewhat limited, but it’s still good, and we rarely get to hear Arabic voice acting, so that itself earns the game points. But what really impressed me is the game’s music, so much so that there are times in the game where I find myself stopping mid-game just to enjoy the game’s enchanting music. Remarkable work from composer Mark Morgan as usual.

Just like any free-to-play game, microtransactions are involved. Of course, you can play the entire game without spending a single coin. But for those who are always looking to one-up their friends, you will find the game’s equipment store where you can buy pretty much all items using real-world money, from potions to enhancements to specialization items to various other items.

"Allods" has a very strong community behind it, and I was surprised by how helpful and friendly the general community is. Any problem or inquiry I would have, I would head straight to the game’s community, and they were very quick and eager to provide assistance. Even within the game itself, the community is quick to make you feel welcome, and accompanying you on the game’s many missions and quests.

Unfortunately, the game does have its share of technical issues, and while some can be fixed by simply asking around for the proper solution, some bugs can appear mid-game with no apparent solution. For example, there are times where I find lines of code within the in-game text, other times I find the camera going out of control during combat, completely ignoring my directions! Nothing really game breaking, but they sure can get annoying.

I really didn’t expect much when I started Allods, but the game soon proved to be a very fun MMORPG experience. With Allods, you delve into a huge game world with endless hours of content that would have you playing for months, exploring the game’s marvelous world. The game’s quests can get repetitive, and the combat mechanics are not the best we’ve seen, but nevertheless, the game will be a great addition to your summer gaming repertoire. For Free!