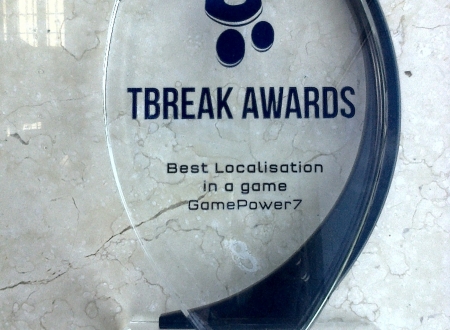 Game Power 7, the pioneer of online Arabic gaming, clinched the award for "Best Localization in a Game" at the annual 2013 Tbreak Awards last week. The awards recognized the outstanding achievements of individuals and teams who made a significant impact on the Middle East technology field.

"It's a great privilege to be named as the "Best Localization in a Game". We will not hesitate to continue achieving the best results in the Middle East gaming sector." said Fadi Mujahid CEO and co-founder of Game Power 7. "The Arabic online gaming market is witnessing exponential growth and we are thrilled to be recognized for "culturalizing" games to suit the Arabic speaking market."

At a glitzy event at Emirates Tower, Dubai, on Wednesday night, professionals in gaming, electronics and the technology field in the Middle East were honored for their exceptional contributions last year.

In 2007 the company became the first Arab gaming company to develop and publish online Massively Multiplayer Online (MMO) and MMO Role Playing Games (MMORPG). Game Power 7 is a socially conscious innovator driven by a vision to build culturalized and socially responsible games for Arabs and Arabic speakers around the world.