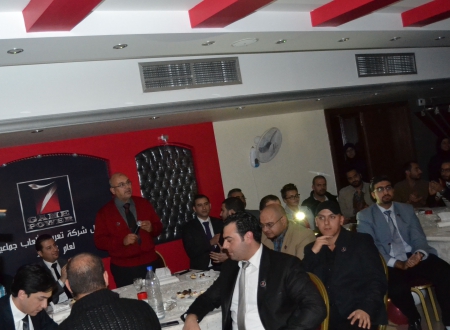 Game power 7 recently celebrated its eighth anniversary as the first Arabic publisher and developer of online and mobile games. Over 90 employees took part in this event, including CEO & Co-Founder Mr. Fadi Mujahid who spoke about the company's plans and the coming projects.

The company started as a part of Spacetoon media group in 2007 as the first Arabic entrepreneur to enter this competitive field; reaching a total of eight games with a rate of one game a year during the last few years. Game power 7 has surpassed mere entertainment to be a messenger for intellectual and moral development to Arab youth, all while cooperating with global developers and strategic partners.

Game power 7 CEO & Co-Founder Mr. Fadi Mujahid also said "the success of Arab employees in dealing with the industry challenges is always present in the company's path, and the big shift to the development of online Arabic games was a crucial factor in which the Arab youth have excelled and showed their expertise and innovation"

Mr. Mujahid expressed his high hopes for the company's future as it’s preparing to release three mobile games. He also spoke about the Culturalization of online games experience to encourage the Arab youth presence in Arabic online games
The event held in Al Rahamah orphanage- included a variety of activities and special ceremonies during which the dedicated employees were honored in appreciation of their innovation and productivity.

During the past few years, Game Power 7 has successfully established its prominence in the Arab market via three different headquarters distributed among three countries, to create a special identity and communicate with all different parts of the market. The company also transcended from a local to a global competitor in a timely manner through different services that suit all Arab players from all around the world.

Since its foundation, the company adopted a variety of social responsibility programs to embody the "effective partnership" in society. During this period, the company started a unique approach to academic innovation nurturing via an academy to train its employees, and arm them with an arsenal of corporate conscious and social training programs. Game power 7 also started "success ambassadors" to accolade innovative ideas and projects, and a number of other social programs to support Arab youth
Games culturalization takes immense efforts from the dedicated teams to ensure proper transition into Arabic culture via a Localization department. It also has departments for Moral Content and Quality Assurance.

Game power 7 recently won the "visionary innovation" award during the annual ceremony held by Frost & Sullivan in Dubai, with a wide participation from global companies.