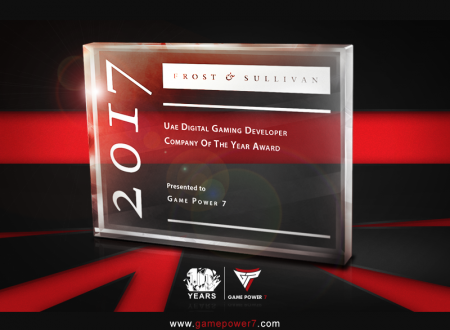 Game Power 7, the leading Arab company in publishing and localizing online video and mobile games, has been recognized as UAE Digital Gaming Developer Company of the Year during the Seventh Frost & Sullivan annual event which was held on 24th May at Atlantis-The Palm, Dubai.

This recognition comes a few months after Game Power 7 launched its new identity which reflects its intention to expand in the Arab video games market, in which it has a huge presence.

"We are honored to be recognized by Frost & Sullivan for the second time. This award proves that our companies are still leaders among other companies that target the Arab children and youth", said Fayez Al-Sabbagh, Co-founder and President of Global New Age Media (GNAM), the Parent company of Game Power 7.

"The essence of our mission remains the same. The only change that occurred was in the method with which we communicate with our target audience. We constantly seek new digital platforms as new ways of communication; this requires from us to always look for new partners who have the same absolute passion for this field and a genuine desire for innovation and development. "Al-Sabbagh added.

Global New Age Media, based in Dubai, is one of the leading companies in the field of educational purposeful media. GNAM is the parent of a group of companies geographically dispersed and specialized in children and youth's edutainment; one of them is Game Power 7, which target Arabic video gamers and has recently celebrated its 10th anniversary as the pioneer company specialized in developing and publishing video games in MENA region.

As a subsidiary of Spacetoon Media Group, Game Power 7 was established in 2007; announcing itself as the first Arabic company in the field of publishing online games. With the efforts of a highly qualified staff, Game Power 7 launched its first published game "Arabic Rappelz", which is still considered the biggest virtual Arab community.  Arabic Rappelz was just the first step of success, followed by a series of achievements in publishing various global games that suit Arab culture. At the end of 2013, the number of registered users exceeded one million.

In parallel with gaining such a huge community, Game Power 7 managed to establish a wide spectrum network of successful international business relations, turning the Middle East into a magnet for world-class game developers.

A variety of distribution channels including local, regional and global agents, in addition to a highly-secured E-payment system, made online purchase experience more friendly, easy and safe.

Global New Age Media (GNAM) was established in Dubai in 2006 and soon became one of the leading companies in the field of educational purposeful media. It laid the cornerstone for the entertainment industry which targeted children and young Arabs by launching several successful projects and companies.

Throughout more than a decade, GNAM's record of achievements kept growing with successful projects which encouraged it to further expand in the field. GNAM's investments covered several sectors of media, and soon after its establishment, it expanded its business to approach new sectors including digital media by entering new markets such as the mobile market and the online business because it realized that these domains contribute in shaping the future of the youth.

GNAM's leadership is driven from the diversity of the projects it launched and the strategic partnerships it held with some of the world's most successful and influential companies. As a result, GNAM has become a magnet for investors who are attracted to its competency, transparency and high professionalism.