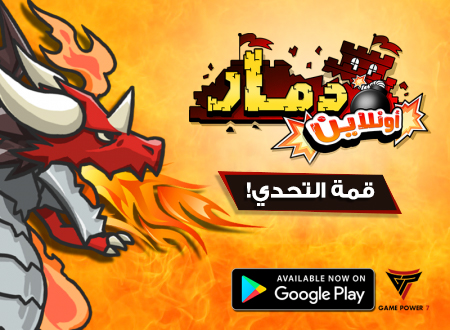 Game Power 7, the leading Arab company in localizing and publishing online games, launched yesterday a new strategy mobile game called "Damar Online", which is the first Arabic game of its type released in MENA to all Arab players.

The Arabic company, based in Dubai, has cooperated with the Japanese video game company "Acquire" to present a full Arabic game that is suitable for the culture in the Arab World.

Damar Online is classified as a "combat city building" game where players can build their own kingdoms, enforce their forts and attack other players' forts to grab necessary resources. It is much more like Clash of Clans mobile game but with some big differences in the game experience.

The main mission in Damar Online is to build a fort, develop it and finally protect it from any anticipated attacks. There are 10 different magical creatures and warriors with various skills and powers. Some of them help players with constructions while others take part in attacking enemies as well as defending the fort against any attacks.

One of the official currencies in the game is gold. Players can exchange them to improve their forts and buy the appropriate buildings to enhance them and make them as high as possible. The bigger the fort is, the more it can produce necessary resources.

Moreover, players can enjoy the game to the max through four amazing systems:  a friendship system, a building development system, a soldier's development system. Together they form a great opportunity to grow the resources and use them to enforce the defenses.

The choice of suitable buildings and proper construction methods are absolutely a strength point for players, but first, they must be aware of the basic function of each building to move on. For example, the barrack is the place where players can produce more soldiers and improve their skills while the bank is considered the right place to save the resources and generate more.

Damar online game is now available for free on Google Play, the download size does not exceed 82 MB (you can download it from here), and it is coming soon on the App Store